About the American Quarter Horse

History of the Quarter Horse

The Quarter Horse, named for its extraordinary speed over a quarter of a mile, is America’s most popular and successful breed. In the fifty-seven years from the beginning of registration in 1940 nearly 3 million horses have been registered and the breed is represented in over sixty countries around the world.

Traditionally the horse of the Western ranches and the short distance racetrack, the Quarter Horse now competes for huge prizes on the racetrack and in many events under Western and English saddle.

American Quarter Horse history goes back well before America was a self-governing country, however it wasn’t until the late 1800’s that the Quarter Horse was an established and recognised type. He was often known by other names – Billy horses, Steeldusts, Rondos, after famous ancestors or after ranch and racing capabilities.

A superb animal in its own right, the early Quarter Horse derived great benefit from judicious use of Thoroughbred blood which helped to improve its saddle horse qualities and to concentrate its racing ability. Around the turn of the century a clutch of horses left an indelible mark on the breeds reputation, mainly in the area of short distance racing, although it was not until the 1940s that formalised track events took over from match racing. 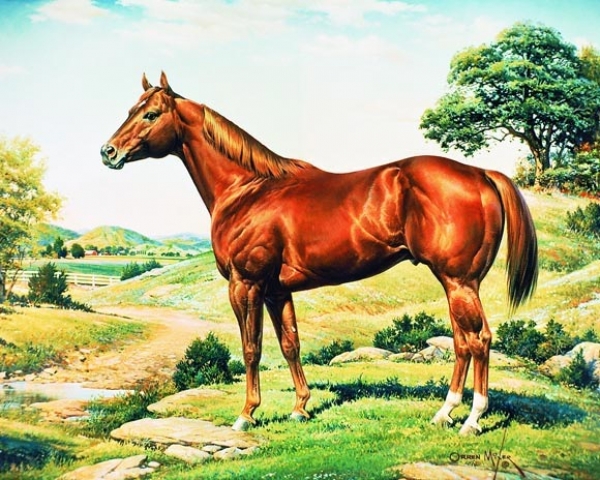 Such names as Steel Dust, Shiloh, Old Billy and Lock’s Rondo cropped up again and again in this respect, and later Traveler, Peter McCue and Joe Bailey. Although mares of note are recorded, the stallions’ exploits received greater recognition due to the broader dissemination of their blood in succeeding generations. With closer attention being paid to record keeping, pedigrees tracing to these horses began to be accurately verified.

The Quarter Horse was prized for his tremendous speed over a short distance, and for his ability to out-think and out-manoeuvre stock, and after a furious burst of activity to revert back to a calm but alert animal conserving energy.

In time the early twentieth-century Quarter Horse evolved by breeding selectively for an animal that combined a low centre of gravity for rapid manoeuvrability, muscle and sufficient weight to hold a steer, rapid acceleration and blinding speed over a relatively short distance and not too much height which made mounting and dismounting easy for a working ranchman. This, combined with the equable disposition and intelligence made the other attributes a workable package.

The Quarter Horse in New Zealand

The first Quarter Horse arrived in New Zealand in 1969 to the Poronui Quarter Horse stud, Taupo. He was Di Bar Flit (by Bar Flit out of Dipsydoodle Milligan) imported from the U.S.A. This was followed by Mr W. Bremner of Auckland who imported Breakaway Bill (by Gold King Bailey out of Dustie E) and three purebred mares, all from the U.S.A.

In 1972 there were two importations from Australia – Mr W. Anderson bringing in Clover Kit Kat to Mosgiel and the Clothier family of Raglan importing Nevada Look At Me.

1974-1975 saw an increase in importations with three mares and four stallions arriving from Australia and for mares coming from the U.S.A. By 1977 New Zealand possessed sires representing most of the then leading bloodlines in the U.S.A.

The New Zealand Quarter Horse Association (Incorporated) was formed in 1970 and was initially occupied with the recording of these imported horses and their progeny. By 1974, with the increase in numbers and interest in the Quarter Horse, the associations activities were expanded to start the promotion of the Quarter Horse at shows and to institute show and performance competitions.

Since these humble beginnings the Quarter Horse has grown from strength to strength with horses competing and winning in all equine activities, as well as giving pleasure to those who just want a good horse to ride.

The New Zealand Quarter Horse has also created interest overseas with a number of horses being exported.

Neck: Of sufficient length and flexibility to be well balanced and give good manoeuvrability. Throatlatch should be trim and clean.

Shoulders: Long and set at an angle of about 45 degrees. Smooth and relatively heavily muscled.

Chest: Deep and broad with well set forelegs and shoulders. Muscling inside forearm gives the appearance of a well defined inverted V.

Barrel: Back is short and close coupled. Full and powerful across the loins. The girth is deep with well sprung ribs. Underline is longer than the back.

Hindquarters: Broad, deep and heavy. Muscled so that they are full at the stifle, thigh, gaskin and down to the hock. The rump is long and sloping gently from hip to tailhead. Muscling on the hip is long, extending down into the stifle which is deep and ties in well with the gaskin. When viewed from the rear it is the widest part of the Quarter Horse. The gaskin is wide and well muscled inside and outside. The hock is broad, flat, clean, strong, low set and free from excess tissue. The muscling ties well into the hock joint and there is no play or give except directly forward.

Stance: The Quarter Horse stands with his legs well under him and flat on the ground.

Mature Size: Although the Quarter Horse usually weighs between 500 and 600 kilos, he is relatively short by comparison to other breeds. Average height is between 14.1 and 15.2 hands high.

Action: Square and true. His action is both balanced and easy. Whenever he turns or stops, it is with his hocks well under him.